This year has been quite an exciting time, lots of changes and new adventures. I have had a quick look at all the shoots I have carried out throughout 2016 and tried to choose just one image that I like from each set, these may not have been the published image choice but is my personal choice. There are a few shoot days missing here and there such as some events but you can find a few of those over on the blog.

In 2017 I am looking to photograph more commercial campaigns for cars and products, I am going to expand into headshots for LinkedIn profiles as well so if you are in need of an image get in contact. Winter is a slow part of the year for me so I decided to use the time to plan and execute some new product images to improve my portfolio.

24th February – I took a trip into London to pick up some mail from the office, couldn’t resist taking a pic of this weird looking piece of architecture on City Road.

10th March – My cousin contacted me about photographing his Audi as he had some new wheels and grill on the car. I have included 2 images from this shoot as couldn’t decide on a favourite. I did several shoots for him this year as you will see further on. READ MORE

11th March – Once a year I visit Rose Bruford College to photograph their Ready Steady Light event, however at short notice I was asked to photograph one of their theatre productions. This was my favourite as I loved the effect the torches gave in the smoke.

12th March – Ferrari Testarossa, a beautiful classic owned by Profusion Customs. This was a test shoot to show how I can perform to win the RWB UK contract. I later took on both the stills and moving image of the first RWB UK Porsche 964 911 Royal Wide build here in the UK. It will be released early in 2017. READ MORE

14th March – Millie Cox, I first met Millie when I was photographing night clubs. After a successful shoot last year we got back together for a shoot in 2016, Millie is such fun to work with and her poses are simply beautiful. I photograph people mainly as a hobby these days and really enjoy it. READ MORE

19th March – Ready Steady Light at Rose Bruford College, this is a Competition run for South London schools who compete against each other to light parts of the college with a maximum of 6 lights. It is always a fun thing to photography as I love lighting design.

24th March – Ford Cortina in the Darenth Valley, this was photographed for Classic Ford Magazine and is awaiting a publishing date.

16th April – A shoot with Valerie, booked last minute due to a cancellation Val did a great job. I just love how a small pocket of light picks up part of her face as we look through a frame of derelict timber. READ MORE

25th April – It’s Jamie’s Audi again however this time a trip to London was in order. It was a rainy night and I questioned whether it was worth going because of heavy cloud cover. Despite the weather we produced some beautiful images. The underground car park is actually in Maidstone. READ MORE

29th April – Firetherm Fleet, a quick job to photograph two new vehicles together. The final image will have the vehicles cut out on a white background as a hero image. READ MORE

6th May – The Drifters, Jahson put on a charity tribute evening to Lionel Richie to raise funds to help a young boy. READ MORE

9th May – Kelly Maynard, I met Kelly whilst photograph for nightclubs and asked if she would like to model for me. As it turns out she had just decided to give it a go and this was her third ever shoot. Kelly is an amazing model and within this short period of time is working full time as a model. She works well with or without direction and was a perfect choice for running a studio course later in the year.(Warning: Adult Content) READ MORE

14th May – Volvo 1800s, came across this beaut’ whilst visiting a garden centre. It is in mint condition and I really wanted to photograph it. The location had been freshly renovated so I wanted to try it out and the two combined looked amazing. The car owner had only just purchased the car so there was not a lot of history, without a story behind it I wasn’t able to get it featured in a magazine but did manage to create some memorable imagery. READ MORE

18th May – 100E Anglia and 103E Pop, photographed for Classic Ford Magazine this father and son duo was great fun. It also meant that the location made it to at least magazine 🙂 READ MORE 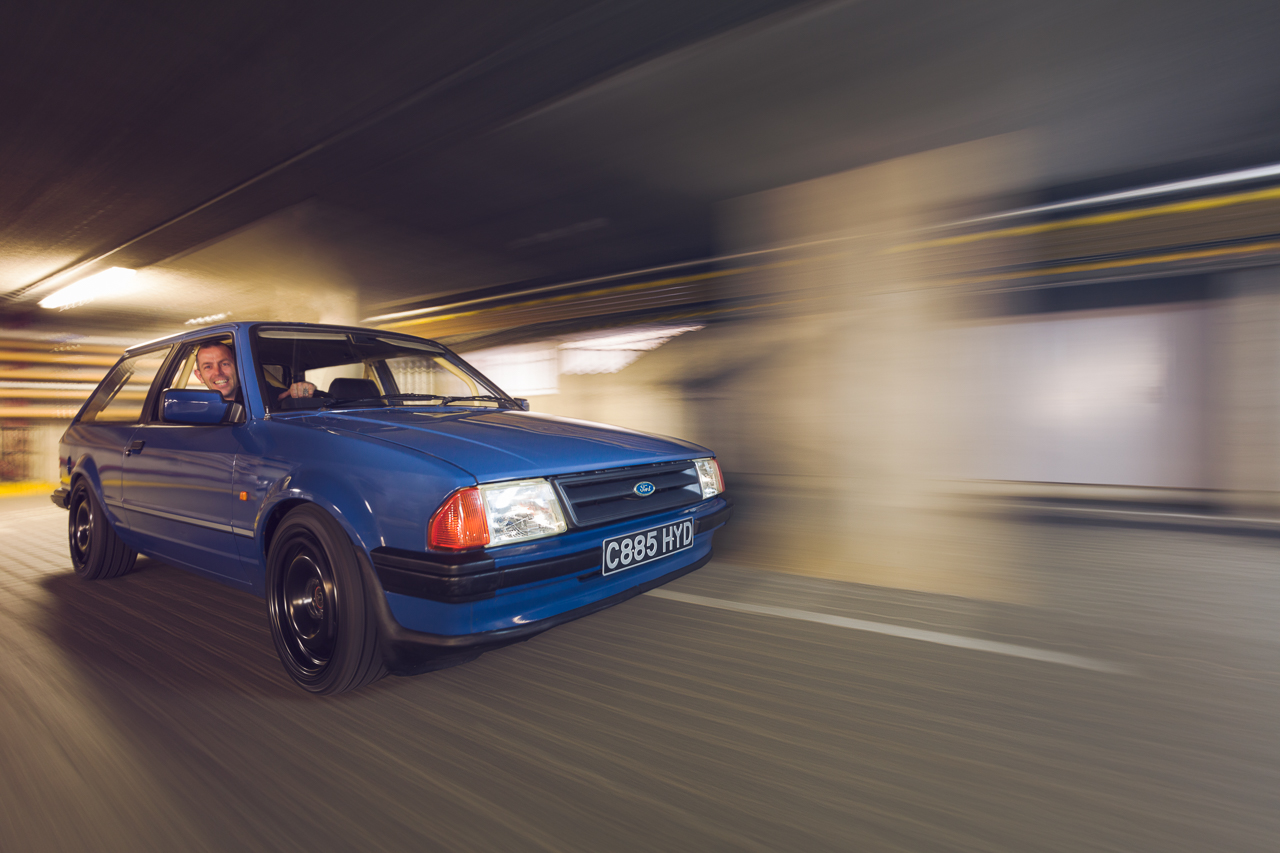 18th June – MKI Fiesta’s at The Ace Cafe, this was a shoot for Classic Ford Magazine to celebrate the 40th Anniversary of the MKI Fiesta. READ MORE

20th June – A quick fashion shoot with Katie to show off her new dress. READ MORE

July didn’t have many feature shoots as we were at car shows photographing cars and selling prints, if you are running a show this year let us know so we can see if we can cover it.

30th July – Ali’s 50th at Leeds Castle, sometimes I cover events and this was definitely a fun one to do with an airshow, fireworks, fire breathers and stilt walkers. READ MORE

3rd August – Kelly Maynard at the beach, as we had beautiful weather and warm water I had to get a shoot at the beach in this year. Following the success of the first shoot with Kelly I booked her again to guarantee success.(Warning: Adult Content) READ MORE

26th August – The RWB project is well underway but lots of imagery and video footage to get through. We released 2 teaser videos, one for the launch of RWB UK and the second to wish a Merry Christmas. Until the article is released on the 25th January 2017 the video cannot be released. Check out the two teasers below:

Everything started to slow down from September as I was working on another project, but managed to get a few shoots in between September and Christmas.

6th September – Yes that’s right Jamie’s Audi again but this time he has custom wheels… I think he has forgotten about the 100E project he is meant to be spending his money on!

8th October – Ford Granada, part of a Buyers Guide for Classic Ford Magazine. Was cut out and placed on a white background in the magazine. READ MORE

29th October – I know what you’re going to say… it’s Kelly again! Well yes it is but this time I used her to run a studio portrait photography class. Interested in Classes? READ MORE

From September to December I went to teach photography in a school for a while to catch them up on practical skills. One of the lighting set ups I taught them was for this bottle:

For the wind down to Christmas I joined an angling club and left my DSLR at home, however I had my iPhone to take some images of the beautiful scenery as I was fishing.

The frost just looked magical in the morning, with the Birch wood complimenting the colour scheme and the red sky as the sun rose it felt like heaven.

As the frost started to thaw out the woods sounded like a massive rainstorm had hit, very strange

I was fishing just below where the sun is.

Despite it being December 28th with a third of the lake frozen I managed to land 75lb of carp.

Britains first RWB 964 911 will be released in Issue 149 of Total 911 Magazine on 25th January 2017. Later on in February the full documentary will be released, so to see the first official images of the RWB make sure you grab yourself a copy of the magazine. For now here is another short clip with a Christmas message from RWBUK and Profusion Customs.

These old Granada’s are getting harder and harder to find since they become popular in the destruction derbies. This saloon is probably the most mint example I have come across and it hasn’t even been restored. Owned by Jon Roberts it is one of the first 100 to roll of the factory line, being sat garaged for over 30 years the mileage is pretty low too. This was photographed as a buyers guide for Classic Ford Magazine Dec ’16 issue, initially I didn’t think too much about the location as it was to be cut out and put onto a white background. Now I look at the original images I realise the background I shot it was actually perfect and wish I spent a bit more time composing it a bit more centrally. However to find out more grab a copy from the shots and enjoy the details below:

Red is certainly the colour to catch your eye and a 6am call time makes your eyes a similar colour. It was important to arrive nice and early at our venue as later during the day the sun is in the wrong position and the pedestrian movement gets rather busy. Mark and Mike’s Pop duo look and sound amazing, if you get to see them at the odd show they attend it is worth taking some time to have a good look. I am not going to say too much about them here as you can read the full specs in the December issue of Classic Ford Magazine. Enjoy the set below: