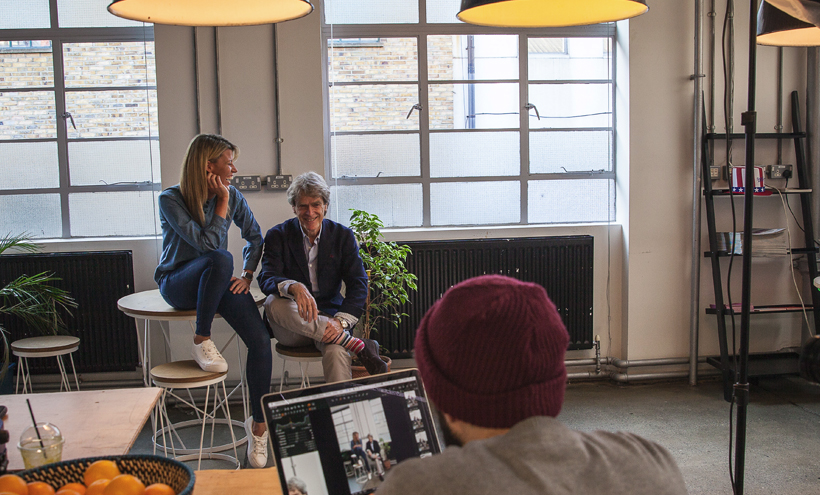 “The Dots is critical for the future success of the creative industries – putting creativity at the heart of commerce and industry, whilst also helping creative people realise their full potential. I’m privileged to help shape its future with Pip and her team” Sir John Hegarty

On Friday I received an email from Pip Jamieson, Founder and CEO of The Dots; which has been named as the “LinkedIn for the creative industry”. The Dots is an important place for aspiring creatives’ to both find and share work opportunities, it is full of inspiration from across the industry and is regularly celebrated in their weekly inspiration emails.

I was introduced to The Dots at University where I met Laura Richardson, Head of Marketing and Partnerships at The Dots who gave a very informative lecture and introduced us to the platform. Since then I have met with her and Pip on many occasions including Award shows as well as portfolio review evenings. I think that is one of the best parts of The Dots, the connections they have in the industry and being able to pull these people together for an evening of portfolio reviews which greatly aid in the direction and self development needed to succeed in this industry.

The exciting news that Pip shared with me is that Sir John Hegarty, advertising legend and co-founder of the award winning agency Bartle Bogle Hegarty has been announced as Chairman of this fast growing network for creative professionals The Dots, if you are not yet part of it you need to check it out! www.the-dots.co.uk

So what does this mean for the future of The Dots? Sir John has more than 6 decades of being at the forefront of the creative industry, with eight D&AD awards, fifteen Clios and almost too many Cannes Lions awards to count, Sir John will be leading the next stage of development and growth of The Dots in the UK after securing a £1.5m investment. This means that the website can now be made mobile friendly, it will become easier to promote yourself and to connect with new contacts and opportunities.

‘Sir John is a creative genius who shares our passion for cultivating and championing top creative talent. We’re beyond excited to be backed by and working with such a legend!” Pip Jamieson After my initial excitement first thing in the morning from the success of the Yeti and SL550 images I had taken I had an urge not to waste the day. I had been planning to go out with my friend Ian who has a brand new, top of the range Range Rover Evoque; I wanted to take it down into the Darenth Valley for some nice scenic shots and the chance to get it to crash through the ford at Eynsford village.

The only problem with the valley is it is full of lots of small roads, which make stopping for a long period not really a viable option. This meant that I would be shooting 100% natural light. As we approached the bird of prey centre I shouted at Ian to stop as I saw the landscape ahead, I quickly jumped out the vehicle camera and tripod in hand and took a couple of shots. This resulted in the image below which got the attention of Land Rover USA who are now using the image for their social media feeds. A bit further down this road is an old Roman Villa and a private track leading to an old farm house. As you enter the track there is a small wooden bridge which I thought would be great to shoot at, having the lovely texture of the old wood, the valley rising in the background and a hint of the farmhouse in the distance. I was hoping that by the time we had returned to Eynsford village the sun would have been low enough to highlight the old bridge and ford, but unfortunately the trees and a couple of houses formed a shadow over the area I wanted the Range Rover to splash through. However I never leave home without a flash or two and after a bit of experimentation I got the flash in place to be able to photograph the vehicle splashing through the water.

There is one more image that I am waiting on, it is a moving shot with an avenue of autumn coloured leaves, come back in the future to see if I have managed to get it looking just the way I would like it. I showed the image to a friend of mine in America, and he wanted to have a crack at finishing it off; so let’s see what he manages to do with it. 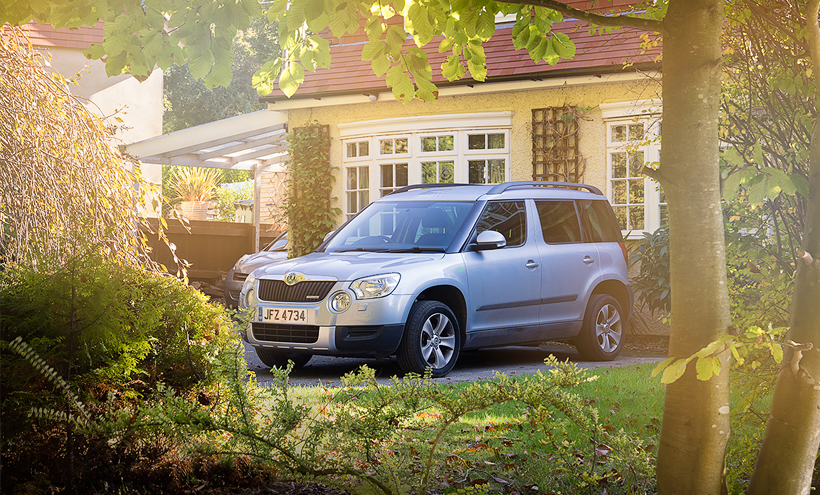 I was travelling to the gym Tuesday morning and the quality of light was just beautiful, it was that low Autumn sun with a really warm glow filling the skies and back lighting the trees. I thought to myself, I need to get out there and do some automotive photography, this is an amazing day!

On my way home I was driving down a small country lane, as I peered through some trees I saw this Skoda Yeti was sitting there so proudly. It looked fantastic framed by the surrounding vegetation and the slight spills of light flaring around it. I quickly grabbed my camera as I knew this would be a shot not to be missed. 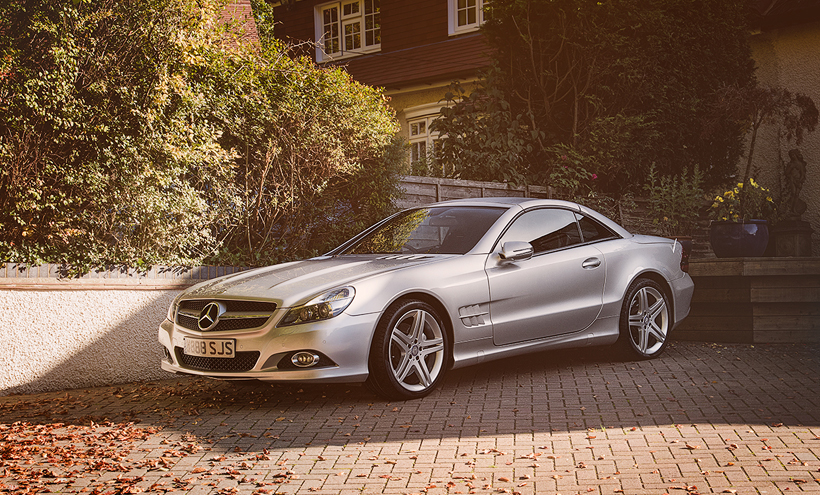 A day of natural light car photography was in hand when this beautiful Mercedes SL550 appeared lurking no more than 500 yards from my home, set back into the shade of the over shadowing house it sat, nice and smooth with the natural light highlighting the fallen autumn leaves below it. 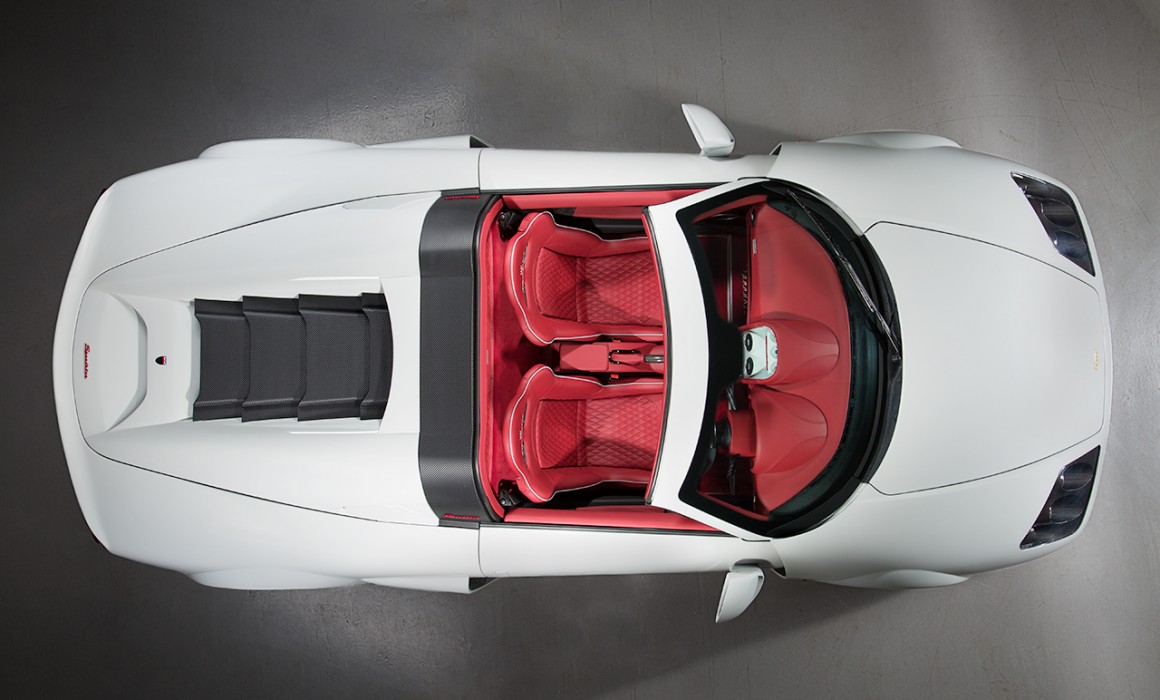 Over the past few weeks I have had the opportunity to meet with several people including Sarah Daw photographic agents and CHI & Parntners in London. Looking to work out my next direction in my career, some of which I have already put into practice and the other is to take more self initiated imagery and to rework some of my old images slightly differently.

It was suggested that perhaps the original workshop floor of Noble Automotive might be nicer than the graphical one which I originally put in post production, therefore I decided to re-work this image of the Noble M600 Speedster prototype with the original floor. Below you will see the differences and I hope that you will comment if you prefer the original floor or the graphical floor so I have a better idea from a wider audience.

The best question I received last week was about this image, I was asked “How many plates did it take to light this shot?” at first I was confused… but then when I realised he thought it was a composite I was very happy to announce it only took 1 shot to light this image, however I did spend a good 3 hours getting it correct first. Please comment below whether you prefer the original workshop floor or the graphical floor.